Dauntless Daughters > About Us

“We create images and stories showing all sorts of women and girls, doing all sorts of bold and amazing things. From women in STEM, explorers, engineers to skater girls and kickboxers: because we are all of it, the whole amazing, diverse universe.
The world for our girls and young women has become a one dimensional representation of womanhood, an empty collection of teapots and passive dolls. If we want our children to embrace STEM careers then we must show them that we believe they can (and should) be involved in those STEM fields.”
Stephanie Green, Owner Dauntless Daughters 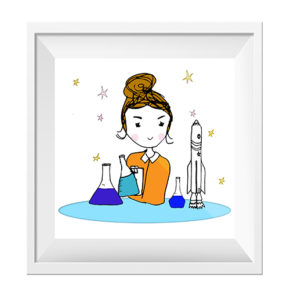 To engage women in the Science, Technology, Engineering, and Mathematics (STEM) workforce we must first understand what it is that turns girls away.

We know just 9% of UK engineers are female, that’s the lowest rate in Europe. We know that the lack of women in STEM is a concrete threat to our economy. We also know that girls are just as academically capable, so why are girls so under-represented?

Dauntless Daughters makes images of women in STEM. Fun, joyful illustrations to normalise the idea of women in these roles. If we can fill the world with pictures of women succeeding, then children will know that adults expect them to do exactly that. Seeing is believing for children – so if they can see images of women in STEM, girls being bold, and taking risks, then both boys and girls will reflect that in the world they create as adults.

As a child, Jantil was never happier than when up a tree, playing football, building dens and making bows and arrows in the woods behind the street where she grew up. Scraped or muddy knees were always a sign of an exciting day! Having had strong interests in Science as well as Art ever since school, by college, Jantil found it tricky deciding which direction to continue her studies. This eventually led her to complete a BA in Ceramics and Glass, where the alchemy of firing earth and glaze allowed her to enjoy both creative expression and scientific experiment. Her other pursuits are illustration, painting, allotmenting, and writing poetry. Also a mother of a strong and sensitive son and a daring and Dauntless Daughter, Jantil is excited and delighted to be putting her creativity to
a new and wonderful use… Helping empower girls everywhere to be and
to raise Dauntless Daughters!

Stephanie Green is passionate about building lasting gender equality. After 13 years in the publishing industry she followed her love of graphic design and opened her own successful studio seven years ago. In 2016 she founded Dauntless Daughters to create bold, diverse illustrations, stories, games, goods and services that empower girls and young women. For children seeing is believing so it is critical to STEM (Science, Technology, Engineering and Mathematics) success to provide diverse learning resources, story books and images staring female and minority characters.

Stephanie lives in the West Midlands with her husband and two children.

Beginning at university, elected as Women’s Officer for the University of Sheffield, Ruth’s involvement in Women’s rights has also been her passion. After graduating and moving in to Social Justice work, Ruth’s career led her on a journey through the ins and outs of Social Care, Welfare and Legal Aid in the UK. Ruth volunteered to help Dauntless Daughters, heading up communications and social media planning. We’ve no idea how she has the time, but on top of Dauntless Daughters Ruth also has a wonderful husband and two wonderful children. She is a Governor of her local school and the founding co-ordinator of ‘Hay Green Recreation Ground’, a voluntary group committed to creating an engaging social space in the local community.

Thanks for subscribing! Please check your email for further instructions.